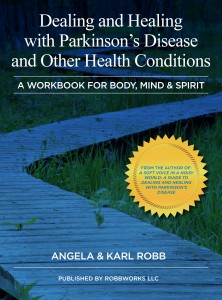 Dealing and Healing with Parkinson’s Disease and Other Health Conditions: A Workbook for Body, Mind, and Spirit

My many thanks  to my friends at the Parkinson Voice Project in Richardson, Texas for this generous review of our second book!

TITLE: Dealing and Healing with Parkinson’s Disease and Other Health Conditions: A Workbook
for Body, Mind, and Spirit
BY: Angela and Karl Robb

Having a workbook to accompany the best-selling Parkinson’s book, A Soft Voice in a Noisy
World, provides an excellent wellness tool for individuals or group discussion. Questions in the
workbook are closely paired with chapters in the book. Additionally, some questions shine light
on new ideas, such as complementary therapies like Reiki, massage, acupuncture, and
reflexology.

Karl Robb brings the same positive attitude, hope, and strength to this workbook as to his
book, A Soft a Voice in a Noisy World. Exercises which reduce stress and reaffirm strength can be
done as individuals or in communication groups, such as The LOUD Crowd® groups at Parkinson
Voice Project. A caregiver or partner might use the questions to strike up meaningful
conversation with the affected person, whether Parkinson’s is the health concern, or some other
health conditions. Either format will help you balance the connection between mind, body, and
spirit.

It’s apparent that Angela and Robb write from a wealth of experience as they direct
questions to sensitive issues, such as “What are you willing to do to help yourself?” and creating
a timeline to improve communication with a health care provider. Angela was honored in 2015
as a White House Champion of Change in Parkinson’s Disease. She and Karl also author an award winning
blog, http://www.asoftvoice.com

Angela and I have been fans, friends, and Board members of the Parkinson Voice Project for several years. We encourage anyone unfamiliar with this organization to learn about the wonderful work that they do.

Karl Robb has had Parkinson’s disease (PD) for over thirty years. With symptoms since he was seventeen years old, Karl was diagnosed at the age of twenty-three. Now fifty-one, he is a Parkinson’s disease advocate, an entrepreneur, an inventor, an author of two books (A Soft Voice in a Noisy World: A Guide to Dealing and Healing with Parkinson’s Disease and Dealing and Healing with Parkinson’s Disease and Other Health Conditions: A Workbook for Body, Mind, and Spirit) with his wife and care partner, Angela Robb. He has blogged for ten years on his website, ASoftVoice.com. He is a Community Team Member to ParkinsonsDisease.net and is a contributor to PatientsLikeMe.com. His blog, ASoftVoice.com, has been recognized four years in a row by Healthline.com as one of The Best Parkinson’s Blogs of 2018, 2017, 2016, and 2015! Healthline.com also listed the book A Soft Voice in a Noisy World in their list of Best Parkinson’s Disease Books of 2017! FeedSpot.com has recognized ASoftVoice.com for 2018 and 2017 as a Top 50 Parkinson’s Disease blog. Karl was a blogger for the 2016 World Parkinson Congress in Portland, Oregon. He is a frequent speaker on Parkinson’s disease issues as well as an experienced advocate for Parkinson’s issues throughout the United States. He is also an advisor and consultant on Parkinson’s disease. Karl is a board member of both the Parkinson Voice Project and Parkinson Social Network based in Virginia. He was an active board member (6 years) and an advocate (18 years) with the Parkinson’s Action Network (PAN). In his free time, he is a photographer, constant writer, longtime magician, and a practicing Reiki Jin Kei Do master. Karl received a Bachelor of Arts degree in English from the University of North Carolina at Chapel Hill. He has been featured by The New York Post, BBC Radio, CBS News, National Public Broadcasting (NPR), in The New Republic magazine and NHK World Television, as well as several Washington, D.C., television stations. You may reach Karl via email at asoftvoice@gmail.com, on Facebook, or contact him via Twitter @asoftvoicepd. I’m available for speaking engagements to share my experience living with Parkinson’s disease. Please contact me at asoftvoice@gmail.com if you are interested in having me speak to your group, conference/symposium, or would like me to write an article for your newsletter or blog. I am not a medical professional and this information is my personal view. I am just sharing my medical journey with you, the reader. I encourage you to seek all avenues that can benefit your condition.
View all posts by Karl Robb »

This site uses Akismet to reduce spam. Learn how your comment data is processed.